I am an experienced executive and non-executive director and a government regulator. I combine strategic leadership with a good, practical understanding of both private and public sectors. I have a strong commercial background in fast moving consumer goods, food, farming, retailing and the environment. I am a driver of change and have extensive communications and media experience.

I was the UK’s first Groceries Code Adjudicator, overseeing the implementation of the Groceries Supply Code of Practice by designated retailers with their direct suppliers. I improved compliance in all retailers which I demonstrated, and encouraged, through annual surveys; I pioneered working in a collaborative way as a regulator and used my statutory powers conducting two investigations and a number of arbitrations.

Two statutory reviews during my term of office concluded that I was “highly effective” and an “exemplary modern regulator with an international reputation”.

I chair MDS, a training provider of graduates to the food and produce industry; I am a Non-Executive Director of the AF Group a £250m farmer-controlled purchasing organisation and I chair the BBC Rural Advisory Committee, which is a group of representatives of rural interests which meets to inform producers and researchers so that rural programmes remain topical and accurate.

A Chartered Engineer with 12 years’ experience in sales and marketing (Mars, Anchor, Vodafone), I ran the Co-operative Group’s farming business, the largest in the UK, for 11 years. I was awarded a CBE for services to agriculture in 2004.

Groceries Code Adjudicator Christine Tacon signs off on a high 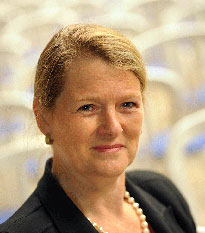