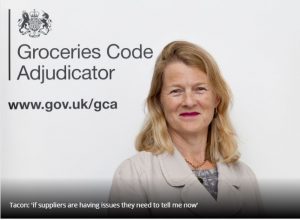 Some major grocery retailers are reversing all supplier delistings made at the start of the coronavirus pandemic, while others are considering making them permanent, according to Groceries Code Adjudicator (GCA) Christine Tacon.

At an online press briefing on 22 May covering the results of the latest Groceries Supply Code of Practice (GSCOP) supplier survey, Tacon said she had contacted all GSCOP compliance officers at retailers covered by the code in the past week. “Interestingly, some of them have now undone all of their temporary delistings. Some of them are working through them and are considering whether some of them should not be temporary but should be longer term, but are fully aware that they have got to work through that with the supplier.”

However, whatever tack the retailers were taking, no complaints or issues about the handling of the delistings had been reported to her so far, she said. “I should say that I have had virtually nothing from suppliers. so if suppliers are having issues they need to tell me. Suppliers should not sit on issues; they should raise them straight away, because now is the time retailers can do something about it. To suddenly end up in a dispute three months later when the retailer can no longer help them is not the right time.

“On the whole, the information I was getting from suppliers when I was proactively trying to talk to them and say, ‘what’s going on?’ is that it was in both of their interests to reduce the range so that they could keep their core products on the shelves. In the words of one of the code compliance officers, suppliers’ and retailers’ interests were totally aligned in reducing the range, reducing the complexity and upping the volume to the maximum they could.”

However, there were indications that some shifts in shopper purchasing habits had not reverted back to previous trends, said Tacon. “All of the retailers are talking about their ‘new normal’,  here people are actually buying differently. I think even if they restock some of the things that were temporarily delisted, they may well not sell either.”

Feedback from the seventh GSCOP supplier questionnaire, the final survey conducted during Tacon’s stint as GCA, registered the highest rate of retailer compliance so far. The survey was carried out by YouGov from 4 February to 29 March and initial results were published on 13 May.

In this latest survey, delisting, including significant reduction in volume without reasonable notice was the second biggest issue reported by respondents in the past 12 months. A total of 21% flagged it as being an issue. The biggest proportion, 22%, cited inaccurate forecasting by
retail customers as an issue. The third largest concern, raised by 19% of respondents, was inadequate processes to enable discrepancies in invoices to be resolved promptly.

From the very first survey in 2014, suppliers have scored their perceptions of retailers’ compliance with the code for the retailers they supply. In 2020 almost 1,500 direct suppliers responded. Only three retailers were rated below 90% for complying consistently well or mostly with the code – which was the best score in 2014. The highest score is 96% and the lowest is 81%. In 2014 the percentage reported as complying with the Code consistently well and mostly ranged from 58% to 90%.

In common with every annual survey carried out by YouGov on behalf of the GCA, Aldi is the highest performer – rated with 96% compliance. But the major riser in 2020 is Co-operative Group Limited (Co-op), which is ranked joint second on 94%. This is a massive improvement
from its tenth place in 2019 when the GCA found it had breached the code on two counts. Co-op also takes top place on the most improved table.

Bottom-placed retailer on overall compliance was Iceland on 81%, followed by B&M on 86% and Marks & Spencer on 89%.

Tacon added: “I also thought it was worth mentioning how well Home Bargains had done, coming straight in at a 92% compliance in their very first year of being designated.” It was the first GSCOP supplier survey in which TJ Morris, trading as Home Bargains, had been included.

The Government recently announced that Tacon would continue as GCA for up to six months beyond her agreed contract to deal with any issues arising from supply arrangements during the COVID-19 emergency.