“Women in Food and Farming” is a group of professional women in food, agriculture, and the land-based industries at all stages of their careers, who get together to discuss business issues, support each other via mentorship and advice, and help generate networks of contacts that might be useful to themselves and their businesses.

Founded in 2011 by Christine Tacon CBE, the group started back in 2011 with just five women and has now grown to over 500 members. Christine is known to many as the first Grocery Code Adjudicator and head of the Co-op’s farming business, she has just been appointed Chair of Assured Food Standards which operates the Red Tractor Assurance scheme amongst other roles.

On this month’s broadcast we are delighted to be joined by Judith Batchelar OBE. 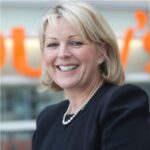 Judith was awarded an OBE in 2015 for services to farming and the food industry. She also sits on the government’s Food and Drink Sector Council, is a non-executive director of the Environment Agency and the Rugby Players Association and is a trustee of the Prince’s Accounting for Sustainability Project, as well as the Royal Botanic Gardens, Kew.

She has worked in the food and drink industry for more than 38 years and prior to joining Sainsbury’s she was a director at Safeway and also spent 12 years in the food division of Marks & Spencer. She currently is the Special Advisor on CR&S and Public Affairs for Sainsbury’s.